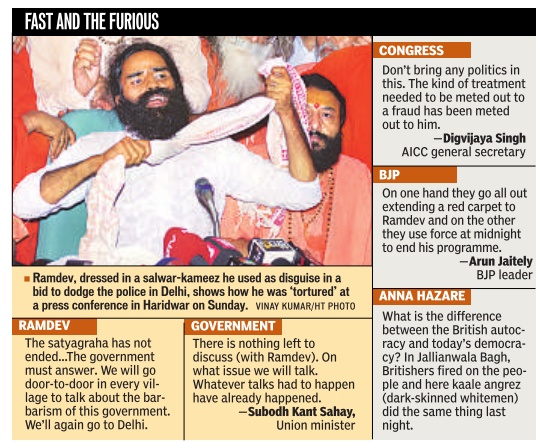 A youth on Saturday made an attempt to immolate himself during an agitation launched in support of yoga guru Ramdev’s fast against corruption at the district collectorate in Bihar’s Muzaffapur town. Devbrata, 22, had been on fast in support of Ramdev’s demand but had to break it as he was admitted to a government hospital in Muzaffarpur by authorities after his condition deteriorated on June 1, official sources said.

As soon as he was discharged from the hospital on Saturday he rushed to the district collectorate where Bharat Swabhiman Trust activists were demonstrating in support of Ramdev, and sprinkled kerosene on his body.
However, policemen prevented him from self-immolation and took him into custody,
On Moday Case filed Against Digvijaya Singh, in CGM court in Muzaffarpur, for saying Baba Ram Dev as Thag.