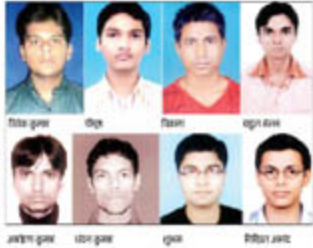 The Tribal City : Muzaffarpur, has also showed  its strength in the IT-JEE 2011 Examination. Total of 23 IItians produced this Year with the Minimum rank of 41 .
Amol secured  Rank no 41 in the IIT-JEE , whereas Ishan Anand secured 58th Rank. In Bihar total of 800 students cracked  IIT-JEE .
Here are complete List of Students from Muzaffarpur, Who have Completed IIT-JEE
As far as Super 30 is Concerned this time 24 students cracked it,After the 100% success rate of the last three years, only 24 of 30 students of Super 30, Bihar’s free coaching centre, have cracked the Indian Institute of Technology-Joint Entrance Examination (IIT-JEE) in 2011. “It is again a good news that this year, 24 out of the 30 students made it to the IIT-JEE
EE. In the last three years, all 30 from Super 30 had qualified. This takes the total number of Super 30 students who have qualified for the IIT-JEE in the last nine years to 236,” the institute’s founder and director Anand Kumar told IANS on Wednesday.
He added that the changed pattern of the exam in 2011 could be a reason why his entire batch could not bag the coveted IIT seats.
The successful candidates include the wards of a roadside vendor, mobile mechanic, private marginal farmer, a truck driver and a class four government employee.
“All of them have managed to successfully chase their IIT-JEE dreams at Super 30 with their commitment and hard work,” he said.
Super 30 helps economically backward students crack the IIT-JEE, and has received numerous national and international recognitions.
The Time magazine featured it in the list of The Best of Asia 2010.
The magazine noted that about 230,000 students appear for the IIT-JEE every year, but just about 5,000 succeed.
Students from poor families have to pass a competitive test to get into Super 30 and then commit themselves to a year of 16 hours a day study routine. Coaching, food and accommodation is free for the students.
Anand, who was mobbed by his students after the results, said it was an outcome of students’ hard work and single-point devotion.
“As a teacher, I am happy for what they have achieved, for it will make a lasting difference to their lives. It underlines the cause Super 30 has been championing for the last nine years. The smiles on their faces give me the biggest award,” he added.
“Hard work, proper guidance and supervision are the secrets of our success. We teach students to eat, sleep, walk and talk only IIT,” he said.
In 2003, the first year of the institute, 18 students made it to the IITs. The number rose to 22 in 2004 and to 26 in 2005. In 2007 and 2006, 28 students made it through ITT-JEE. In 2008, for the first time 30 students cracked the exam, a feat which was repeated in 2009 and 2010.
Anand said that the institute is supported by the income generated from his Ramanujam School of Mathematics, which has students who can afford to pay fees.
The Super 30 was started by Anand along with Bihar’s additional director general of police Abhyanand. Three years back, Abhyanand dissociated himself from the institute.